To the President of the WORLD HEALTH ORGANIZATION

Being at the leadership of the World Health Organization is honourable. The WHO is an organization that is effective important and accountable all over the world. I am grateful to you and to all your staff for the efforts made towards the improvement of the health care system of the world.

Thanks to your sensitivity and work, it is now possible to focus on real health reform, to stimulate new diseases and prevention and innovative medical therapy. New strategies that need an extraordinary presence and courage.

Since its creation, the WHO is fighting to protect the world from dangerous illnesses and the result is that million of people are now safe from what were once deadly or incurable diseases. The gratitude to all the caregivers that help children and elderly people all over the world will never be enough.

Not only cure! Since 1946, the WHO is aware that being healthy does not simply signify the absence of illnesses”, but also signifies “ a state of mind”, a “complete social & psychological wellbeing”.

In this way the concept of preventing illnesses is improving: the idea of feeling happy as an exercise routine is a miraculous medicament. A project at a very low cost.

Can you imagine, dear President, a sensitive, renewed climate in the World Health System obtained through the cooperation between traditional and an innovative Health System? A choice for all the world: healthy or unhealthy people, doctors and anyone else with the advantage at a very low cost.

I have already written to the Italian Health Minister, in which I asked him to try to introduce a strong and courageous change of the Health System. I asked him to promote Laughter as a therapeutic support and in addition as a primary element for prevention. Thanks to all his efforts this new idea would be spread in all the world and it would be a helpful contribution to improve the World Health System.

Movies, clowns and artists have already proved the benefits of Laughter-therapy. Even the famous doctor Patch Adams succeeded in using humour as medical therapy. But what I want to introduce as a new therapy is even better and has longer effects: Laughter Yoga.

I recently wrote and published a Letter addressed to all the Doctors of the World. I am personally introducing this new therapy to several doctors who have expressed interest in such an original purpose. I thank them for all they are doing and invite them to suggest Laughter as a therapy. I am very determined that they also recognize that this is an innovation that can open the door to an unexplored frontier of medicine.

It will not be difficult to bring the Laughter Therapy as a daily exercise routine in healthcare facilities. Benefits would be brought by the cooperation of traditional therapy and Laughter Yoga through simple and pleasant daily exercises.

There are many easy and possible ways. One of them for instance,  is to introduce the concept of a new professional figure “the Laughter Leader”. A person who promotes laughter in healthcare facilities. A second way, would be to define a new complete and quick formative strategy to begin learning the new method.

Scientific research reveals that Laughter helps many people to become healthier, and even cardiologists recognize its benefits for the heart. The most natural consequence of an open policy towards the Laughter is being sure about its benefits.

Laughter Yoga has earned reliable and scientific consideration as sustained and confirmed by recent scientific research. For instance, the studies of doctors William Fry and Lee Berk, as well as recent research by Maryland University.

The goal of Laughter Yoga is not only to bring good health but to also introduce a chance of prevention: laughter is a body exercise. Everybody can do it.

Humour needs to be understood, it is a state of mind.

“Laughing For No Reason” stimulated as a body exercise, is instead what a small child does naturally. Thanks to the Indian doctor, Dr. Madan Kataria, “anyone can easily laugh for no reason, without having to rely on jokes or humour”.

The concept of Laughing is based on a scientific fact that the body (organism) cannot differentiate between fake and real laughter. One gets the same physiological benefits and significant general health improvements. Doctor Otto Warburg has proved that laughter has a positive impact on the cellular oxygenation that influences the course of survival of cancer patients.

Can you imagine, dear Mrs. President, how many benefits and how many people in the world could be helped to become healthier by using such a natural no stress-remedy method? The concept of Laughing For No Reason brings one to be more responsible for ones own health. This is an important cornerstone of all the entire World Health Society. In addition, this could be the moment in which the use of medications would become just a possibility among others. And even at a low cost.

I am well aware that to realize this project we need courage. We have to believe in it. We need to act. It might be necessary to fight against the strong resistances of all those who use illnesses as profitable business, taking advantage over others.

To believe in the power of Laughter is an open choice towards new different ideas very far from just the pure illness and all its causes. This does not mean only a simple comparison to traditional medicine, but is a true, genuine consideration of the authentic Hippocrates ’s spirit for the real love of illness people. For their wellbeing in happiness. No burden for the society and to get less illnesses.

Victor Hugo wrote” Nothing else in the world is so powerful as an idea whose time has come”. Mrs. President, the time has now come. The time for change in the World Health System which should be open to new ideas, including the natural and human resource of Laughter. It is the moment to dare. It is the moment to challenge cost effectiveness. With your determination and qualities you are the one that can make the difference.

Be courageous with this New deal of the entire Health World System.

We have to recognize that a lot of important changes have been made due to health education, through nutritional projects and healthy lifestyle with daily exercises, checking high blood pressure and eliminating smoking. Important steps forward have been done.

Now Laughter education would speed up the realisation of our own hard-won, preserved and enhanced healthiness through happiness. If laughing is normal when someone is happy, the use of the Laughter Yoga teaches us to be easily happy because of laughing. Laughing for no reason allows the mind to be pleased and happy to follow the body in doing it.

The Italian Poet Giacomo Leopardi wrote” who is so courageous to laugh has the world in his hands”. This is an important result that can be obtained by either ill or healthy people, through their psychological, physical and social wellbeing. People that enjoy their life are those who are able to act in their life with no stress using aerobics exercises and pleasant laughter. These men and women are the true richness of the world.

–  For the official website of Laughter Yoga International of Dr. Madan Kataria: www.laughteryoga.org

–  For scientific information, an excellent reference is given by U. S. National Library of Medicine 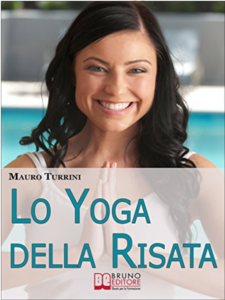